Looking for another article with the name X-Men? Check out the X-Men disambiguation page.

X-Men, also known as X-Men: The Animated Series, is an American animated television series which debuted on October 31, 1992, in the United States on Fox, as part of Fox Kids Saturday morning lineup. X-Men was Marvel Comics' second attempt at an animated X-Men TV series after the pilot, Pryde of the X-Men, was not picked up.

In 1991, Margaret Loesch became the head of Fox Children's Network. Having championed the Pryde of the X-Men pilot in 1989, she was quick to set up an order of thirteen episodes of X-Men. Saban Entertainment was contracted to produce the show and hired a small studio Graz Entertainment to produce the episodes as it did not have sufficient staff at the time to handle production in house. Graz employed the creative staff wrote and designed each episode, and drew the storyboards. The voice work was done using Canadian studios and South Korean studio AKOM was hired to animate the episodes, X-Men was originally to premiere over the Labor Day weekend in September; due to production delays, it was pushed to the end of October. When the animation team AKOM turned in the first episode, it contained hundreds of animation errors, which AKOM refused to fix. Because of time constraints, the episode was aired in an unfinished form. The second episode was turned in just before deadline, with fifty scenes missing and only a single day reserved for editing. In "Night of the Sentinels" two-part episode originally aired as a "sneak preview" on October 31, 1992.

Because of the production delays and animation errors in these two episodes, Fox threatened to sever AKOM's contracts. When Fox re-aired the pilot in early 1993, the errors were corrected. The series earned top ratings through it's first season, and was renewed for a second season of thirteen episodes.

After the box office success of the first live-action X-Men film in the summer of 2000, Fox began airing reruns of the cartoon on weekday afternoons. At first, only episodes that primarily featured content in the movie were broadcast. Later, the series was aired in proper order, but it was pulled from the air in early 2001. Soon after, ABC Family and Toon Disney began airing reruns, due to Disney's buyout of Saban Entertainment programs. X-Men was taken off the air again after Toon Disney was discontinued and Disney XD took over it's programming.

The series dealt with social issues, including divorce ("Proteus"), Christianity ("Nightcrawler and Bloodlines"), the Holocaust ("Enter Magneto", "Deadly Reunions", "Days of Future Past" and "The Phalanx Covenant") and AIDS hysteria ("Time Fugitives"), and feelings of loneliness ("No Mutant is an Island"). Television was satirized in the episodes "Mojovision" and "Longshot".

The first season of the show brought the X-Men into conflict with human conspirators building mutant-exterminating Sentinel robots, Magneto and his attempts to instigate a human-mutant war, and the powerful mutant Apocalypse's plans to eradicate the weak, both human and mutant alike. Other storylines including X-Men member Morph's death at the hands of Sentinels. Beast's incarceration, and an assassination attempt on U.S. senator Robert Kelly by Apocalypse's minions to turn human sentiment against the mutants. The second season sees Cyclops and Jean get married and become the targets of Mister Sinister, who hopes to use the genetically perfect combination of their DNA to create an army of obedient mutants. Morph returns, having been rescued by Sinister and brainwashed into forcing the X-Men apart. The season also features the growing rift between humans and mutants, spearheaded by the Friends of Humanity, an anti-mutant group who lead the persecution of all mutants. Apocalypse also returns, developing a deadly plague to be blamed on mutants, fueling mutant hatred.

The third season focuses on the cosmic force, the Phoenix, which merges with Jean Grey and eventually turns her into the malevolent and powerful Dark Phoenix. The season also introduced the Shi'ar Empire who want to stop the Dark Phoenix, including Lilandra and Gladiator. Other storylines include the introduction of Wolverine's former lover turned mercenary, Lady Deathstrike, former X-Men member Iceman, and the villainous Shadow King.

Although the majority of series's stories are original, a number of storylines and events from the comics are loosely adapted in the series, such as:

The show was both acclaimed and commercially successful. Along with Batman: The Animated Series, the series success helped launch numerous comic book shows in the 1990's.

In 2009, IGN ranked X-Men: The Animated Series as the 13th greatest animated show of all time in their top 100 list, the third-highest standing for a comic book-adapted show on the list. The show also ranks in at 152 on IMDb's Highest Rated TV Shows with At Least 5,000 Votes.

Connections to Spider-Man: The Animated Series

In The Phoenix Saga, Part V: Child of Light, Spider-Man's hand could be seen shooting a web to save someone. This episode aired two months before the premiere of Spider-Man: The Animated Series.

In the episode, Cold Comfort a Daily Bugle newspaper was show. The article reading "Mutant Crisis!" was written by J. Jonah Jameson.

In Nightcrawler, Mary Jane Watson had a brief cameo at the ski lodge the X-Men were staying at.

In One Man's Worth, Part I, Scarlet Spider appeared as a member of the human resistance during an alternate timeline where humans and mutants were at war with each other. 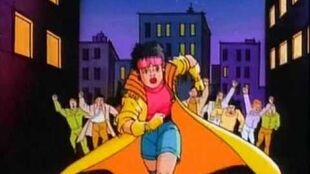 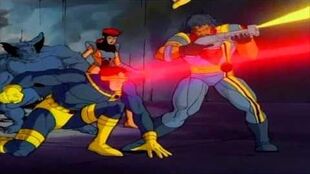