Vampires are a race of supernatural beings that are immortal, have unique powers, and are nocturnal.

Exactly how vampires came into being is unknown. Vampires are supernatural beings that are nocturnal.

According to Whistler vampires are also known as nosferatu which is an ancient term that translates to vampire.

All vampires have enhanced senses and reflexes and can fly.

All vampires have a psychic link with each other.

In order to survive vampires must drink the blood of others. According to Whistler the reason vampires drink blood is because vampire's bodies burn the iron out of their blood to quickly. Because of this they must feed on other peoples blood to replenish their bodies with iron.

All vampires have super strength and can fly.

Vampires also have enhanced senses such as sight, hearing, and smell.

According to Miriam all vampires have a telepathic link to each other.

The more powerful vampires such as Miriam can place others under their mental control by having their victims look into their eyes. These more power vampires can also read peoples minds and possess telekinesis which allows them to move objects with their mind.

Vampires can be weakened and killed by sunlight. The exception to this is Morbius who is turned back into a human after being exposed to sunlight and Alpha Red who is totally immune to the effects of sunlight.

If exposed to garlic vampires will not be able to breath and they will die from suffocation.

If vampires do not drink blood for a long time they will become extremely weak. 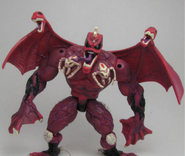 Vampires were created roughly 15,000 years ago when a small band of sorcerers from the legendary city of Atlantis discovered a book known as the Darkhold, an indestructible text filled with arcane lore and dark magic written countless millennia earlier by the primeval demon Chthon. These sorcerers used one of the spells found within the text and caused some of their enemies to rise from their graves in vampiric form, believing that these vampires would be under their control. However, these vampires were more powerful than their would-be masters, slew them, and escaped Atlantis before the continent sank. The first true vampire, who turned out to be an Atlantean priest that was dying and saw this as an opportunity to gain eternal life, was known only as Varnae. Varnae reigned as the unchallenged leader of Earth's vampires for many thousands of years before ceding the title and position to Vlad Dracula sometime in the middle of the 15th century. Dracula retained this title in a nearly unbroken reign until Earth's Sorcerer Supreme, Doctor Strange, uncovered a mystical spell that would banish all vampires from this dimension. Ironically, this spell was found within the Darkhold, the same mystical text containing the spell used to create vampires in the first place.