Renews youth to it's users

The Tablet of Time is an ancient, magical artifact that can renew youth to the elderly.

The Tablet of Time was created thousands of years ago by the ancient Toltecs and had magical powers to make a person young again.

Once a year the Toltecs would hold a race up the side of their pyramid. It was a long and difficult race but the winner would have his youth renewed by the Tablet of Time.

In the present the Tablet of Time was discovered by explorers and brought the New York City to be studied by Curt Connors at Empire State University. Curt believed that the Tablet of Time held the key to understanding genetics even more and believed that it could be used to cure himself from turning into the Lizard and that it could cure Spider-Man from his mutation disease and prevent him from turning into the Man-Spider.

Silvermane eventually got his hand on the Tablet of Time and used it make make himself a young man despite Dr. Connors warnings. However, Silvermane kept getting younger until he turned into a baby. 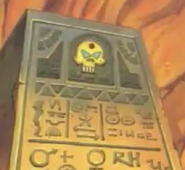 It was created during the Hyborian age in the language of the sister cultures Lemuria and Atlantis.

Over the millennia countless men died to get their hands on the Lifeline Tablet.

The Lifeline Tablet had instructions on how to create a biochemical formula that could rejuvenate, heal and grant it's user the chance to reach the full evolutionary potential of it's race.

Like in Spider-Man: The Animated Series, Silvermane used the Lifeline Tablet to make himself young.

Lizard at one point attempted to use the Lifeline Tablet to make reptiles the dominate species on Earth.

In the 2011 movie Thor, the Tablet of Life and Time was one of the artifacts in Odin's vault.

The rune markings on the tablet can be translated as: "Those Who Sit Above in Shadow." That is a reference to "The Gods of the Gods", who, in the comics, are omnipotent and omniscient beings that draw their life energy released by Ragnarok, and caused the cycle of death and rebirth to continue.

Retrieved from "https://spiderman-animated.fandom.com/wiki/Tablet_of_Time?oldid=54989"
Community content is available under CC-BY-SA unless otherwise noted.