Saratoga T. "Sara" Ballantine is an American actress is an alumni of the Hollywood Professional School (also known as Hollywood Conservatory of Music and Arts) and is known for her roles in Spider-Man: The Animated Series, The Nutty Professor, Batman: Year One and Phantom of the Paradise.

Sara Ballantine is the daughter of comedian, magician, and actor, Carl Ballantine. Her mother was Ceil Cabot who was an actress.

Sara Ballantine graduated from the Hollywood Conservatory of Music and Arts.

Sara Ballantine started her acting career in 1966 on an episode of The John Forsythe Show.

She has over thirty credits in television and film. 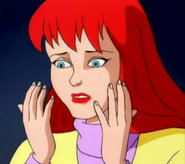