Looking for another article with the name hover chair? Check out the hover chair disambiguation page.

Because of Charles Xavier's inability to walk he used a hover chair instead of a normal wheelchair.

Who designed and built the hover chair for Charles Xavier is unknown.

The hover chair has various built in mechanisms that allowed Xavier to control Cerebro or to detect disturbances in the space time continuum. There is also a built in communication device.

The hover chair also has a secret compartment where Professor X keeps a laser gun in the event that he should have to defend himself from attackers.

The original hover chair had a more box shape look. A second hover chair that was built for Xavier was more oval shaped. 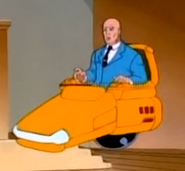 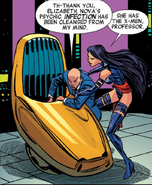 In the comics, Xavier's hover chair was designed and built by Forge and was later upgraded by using Shi'ar technology.

Retrieved from "https://spiderman-animated.fandom.com/wiki/Professor_Xavier%27s_hover_chair?oldid=56728"
Community content is available under CC-BY-SA unless otherwise noted.