Peter Mark Richman (April 16, 1927 - January 14, 2021) was an American actor who has starred in films and on television, who was for many years credited as Mark Richman. He is known for his roles in Chain's Hundred, Santa Barbara, Friday the 13th Part VIII: Jason Takes Manhattan, and The Naked Gun 2½: The Smell of Fear.

Born Marvin Jack Richman in Philadelphia, Pennsylvania on April 16, 1927, to Jewish parents, he is the son of Yetta Dora (née Peck) and Benjamin Richamn, a painting and paper-hanger contractor.

Making his feature film debut in the 1956 film Friendly Persuasion, Richman was, by that time, already a regularly employed TV actor, as well as a member of New York's Actors Studio, a resource of which he would avail himself frequently until moving to Los Angeles in 1961. He is perhaps best known for his role as Nicholas "Nick" Cain in the 1961 film The Murder Men and The Crimebusters. He reprised his role as Nicholas Cain in the NBC television series Cain's Hundred. Richman's other TV roles were on the soap opera Santa Barbara as Channing Creigton 'C.C.' Capwell, Jr. (1984), Longstreet as Duke Paige, on the ABC soap opera Dynasty as Andrew Laird (1981 - 1984), and a recurring role on Three's Company (1978 - 1979) as Chrissy's father, Rev. Luther Snow. He also guest starred on Beverly Hills, 90210. His other films include Friday the 13 Part VIII: Jason Takes Manhattan (1989) and Vic (2005).

His television credits include Justice, The Fall Guy, The DuPont Show with June Allyson, Stoney Burke, Breaking Point, The Fugitive, The Outer Limits, Blue Light, The Invaders, Alfred Hitchcock Presents, The Wild Wild West, Bonanza, Daniel Boone, The Silent Force, Get Christie Lovel, The Bionic Woman, Knight Rider (co-starring with Edward Mulhare), Three's Company and Matlock. He was often seen on Mission: Impossible and Combat!, as well as other shows of that era. Richman also appeared in eight episodes of The F.B.I. which starred Efrem Zimbalist Jr. and Philip Abbott. He appeared as Ralph Offenhouse in Star Trek: The Next Generation's first season episode "The Neutral Zone." Richman starred in the last filmed episode of The Twilight Zone, called "Fear." He voiced the Phantom in the animated series Defenders of the Earth.

Richman sits on the Board of Trustees of the Motion Picture and Television Fund.

Peter Mark Richman married Helen Landess in 1953. Together they have five children, including composer and Grammy Award-winning conductor, Lucas Richman.

Peter Mark Richman died of natural causes in Woodland Hills, California on January 14, 2021, at the age of 93. 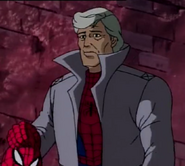