Patrick Labyorteaux (pronounced La-Beer-Toe) is an American actor, television producer, and television writer. He is best known for his roles of Andrew Garvey on the NBC series Little House on the Prairie and as Bud Roberts on the CBS series JAG.

Patrick Labyorteaux was born on July 22, 1956. Patrick was adopted by Roland Labyorteaux, an interior designer and talent agent and actress, Frances Marshall (1927 - 2012) at a young age after being labeled "unadoptable."

Early in his career he was billed under the name Patrick Laborteaux, dropping the "y."

He has starred on TV and film; his well known TV roles are on the hit NBC series Little House on the Paririe as Andrew "Andy" Garvey from 1977 to 1981, and on the CBS hit series JAG as Lt. Cmdr. Bud Roberts from 1995 to 2005, a role he reprised for an episode of JAG's spinoff, NCIS. Near the end of the series Labyorteaux's character lost his leg, leading to speculation that the actor had in fact lost his leg, but the show's spokesperson, Daniel Ekeblad, stated "I'm happy to report Patrick Labyorteaux has not suffered any injury reguarding his leg. He's just a very good actor. However, Labyorteaux did once have an accident befall the character of Bud to reflect something that had happened to him; the incident of Bud's broken jaw was written in after an accident that broke the actor's jaw.

Labyorteaux has starred in films as well: one of his well-known roles is in the 1987 comedy film Summer School as football player Kevin Winchester. He also appeared in the 1989 cult film Heathers as mean jock Ram Sweeney.

Labyorteaux has also done voices for cartoons such as Spider-Man: The Animated Series, Godzilla: The Series and others.

Some of the other TV shows on which he has made guest appearances include Starsky and Hutch, 21 Jump Street, Living Single, Yes, Dear, Lois & Clark: The New Adventures of Superman, The Love Boat, Ghost Whisperer and ICarly.

Labyorteaux is married to television producer Tina Albanese, they have a son together. He along with Albanese are the creators and executive producers of the Nick at Nite sitcom See Dad Run, starring Scott Baio. 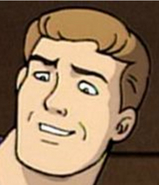 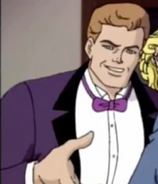 Retrieved from "https://spiderman-animated.fandom.com/wiki/Patrick_Labyorteaux?oldid=54897"
Community content is available under CC-BY-SA unless otherwise noted.