Nick Jameson is an American actor and voice actor, as well as a songwriter, composer, musician and record producer. He is known for his roles in the movies Along Came Polly, Beowulf, Blades of Glory, and Frozen. He is also known for his work with the singers Paul Butterfield and Tim Moore and with the bands The American Dream and Foghat.

Nick Jameson was born in Columbia, Missouri on July 10, 1950, and was raised primarily in Philadelphia.

He has apeared in the television series Mission Hill, The Critic, 24, Lost, The King of Queens and, vocally, in Star Wars: Clone Wars as Palpatine, Darts D'Nar in Star Wars: The Clone Wars, the radio adaption of Dark Empire, and several other productions of Star Wars. He has over 114 film credits. He has also voiced in Spider-Man: The Animated Series as Michael Morbius, and provided the voice of Max in the cult-classic video game Sam & Max Hit the Road. He also voiced Lloyd in "Arc the Lad: Twilight of the Spirits." Recently, his voice was featured in the video game Metal Gear Solid: Portable Ops as Colonel Skowronski. He voiced Jim Dear in Lady and the Tramp II: Scamp's Adventure. He also voiced as Aldar Beedo in the video game Star Wars: Episode I Racer. In 2012, he voiced the character Toxic Reapa from the miniseries Hero Factory. He voices Marshall Dune in the point-and-click adventure Broken Age.

Nick has also had a relatively lengthy career in music. Early on, he was a member of The American Dream, a 1960's Philadelphia band whose debut album was Todd Rundgren's first production credit. More prominent success soon followed when he briefly became the unofficial fourth member of the British bues-rock band Foghat in the mid-1970's, producing several of their albums as well, including Fool for the City, which spawned the band's biggest hit "Slow Ride." Nick's bass-playing is prominently featured on this track as well as the rest of the album. He has also released a couple of solo albums: Already Free (19770 and A Crowd of One (1986), the latter of which featured the single "Weatherman", which cracked the Billboard Top 100. The track has a breezy pop-rock feel that was fairly typical in terms of both melody and tempo to Mr. Mister's big hit, "Kyrie", albeit with much lighter percussion. A year later, Jack Wagner recorded a cover version of the future (under the title "Weatherman Says"). Another track from the A Crowd of One album, "Love's Closing In" was also featured on the soundtrack to the 1986 film, A Fine Mess.

Although an American native, Jameson has become very well known for his ability to perform in a variety of deceptively authentic accents, particularly British English and Australian. 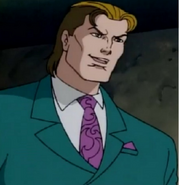 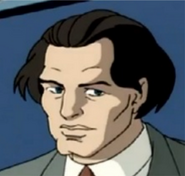 Wolfgang Groitzig
Add a photo to this gallery

Retrieved from "https://spiderman-animated.fandom.com/wiki/Nick_Jameson?oldid=55103"
Community content is available under CC-BY-SA unless otherwise noted.