Liz Georges is an actress, known for As Told by Ginger, Mighty Joe Young, and Mr. Saturday Night.

She was born as Elizabeth Jeanne Georges.

Liz Georges started her career in 1981 in an episode of Dallas.

She appeared in twenty five different television series between 1981 and 2009.

Liz Georges married actor, David Paymer in 1988 and they have two children. 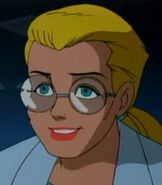 Debra Whitman
Add a photo to this gallery

Retrieved from "https://spiderman-animated.fandom.com/wiki/Liz_Georges?oldid=45767"
Community content is available under CC-BY-SA unless otherwise noted.