Linda Gary Dewoskin (November 4, 1944 - October 5, 1995) was an American voice actress who worked on multiple animated projects. She is known for her roles in He-Man and the Masters of the Universe, She-Ra: Princess of Power, Filmation's Ghostbusters, and Spider-Man: The Animated Series.

Linda Gary Dewoskin was born in California on November 4, 1944. She married actor charles Howerton on December 21, 1967 and had two daughters, Alexis and Dana. Gary was also stepmother to Howerton's daughter from his previous marriage, Lynn Howerton. She and Charles found acting work in Rome, Italy in the 1970's where they learned Italian and wound up working in films and commercials as well as doing English language dubbing in Italy, Spain and Germany.

Linda was one of the most popular voice-over artist in animation and also appeared in tow live-action films, 1977's Joyride To Nowhere with husband Charles Howerton and 1980's Cruising with Al Pacino. She lent her voice in such movies as Wolfen (1981) and Switch (1991).

Linda voiced different characters on several Hanna-Barbera television series; Scooby-Doo and scrappy-Doo, The Smurfs as Dame Barbara in one episode, Top Cat and the Beverly Hills Cats as Mrs. Vandergelt, The Pirates of Dark Water, where she did additional voices and Swat Kats: The Radical Squadron as Doctor Abby Sinian. She voiced Queen Morbidia & Nicara in The 13 Ghosts of Scooby-Doo.

The ABC Weekend Special was a Saturday morning TV series that aired from 1977 to 1997. It featured stories in both the live-action and animated realms. Linda's voice could be heard on Scruffy, The Puppy Saves the Circus, The Amazin Bunjee Venture, The Return of the Bunjee, The Velveteen Rabbit and The Magic Flute.

During the 1980's, Gary did several guest voice-over appearances in such Disney television series as Darkwing Duck, DuckTales, TaleSpin, The Little Mermaid series and Bonkers. She voiced a gazelle and a hippo on the Lion King read-along cassette story, The Brightest Star. She also voiced Maleficent and the Opening narrator in Fantasmic. She voiced Muffy Vanderschmere in TaleSpin.

Linda voiced Chromia on the 1985 Transformers animated series as well as several other characters throughout the series.

Linda Gary voiced Colleen in the episode "Arsenic and Aunt May" in Spider-Man with Ted Schwartz as Peter Parker/Spider-Man. She later voiced Aunt May in Spider-Man: The Animated Series with Christopher Daniel Barnes as Spider-Man.

Her voice acting was mostly for the Filmation Studio. She voiced characters in several of Filmation's TV series such as The Kid Super Power-Hour with Shazam!, BlackStar, and as the title character in Web Woman.

Linda voiced Jane on an episode of Tarzan: Lord of the Jungle.

Her most recognized work is on He-Man and the Masters of the Universe and the sister series She-Ra: Princess of Power. She was reunited with fellow voice over actors Alan Oppenheimer and george DiCenzo from BlackStar. She provided many of the female voices on He-Man such as Tella, Evil-Lyn, the Sorceress of Castle Grayskull and Queen Marlena as well as several from She-Ra like Madame Razz, Glimmer, Shadow Weaver, Scorpia and Entrapta. She also did the voices of many one-off characters, particularly for young boys.

In video games, she provided voices in several adventure games such as King's Quest VI: Heir Today, Gone Tomorrow as the Oracle, Red Chess Queen, Mother Ghost and Queen Allaria, Thayer's Quest as Lady In The Woodlands and Gabriel Knights: Sins of the Fathers as Grandma Knight/Tetelo. 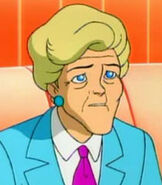 Chameleon
(Disguised as May Parker)

Chameleon (Disguised as May Parker)