Hulk as he appears in The Incredible Hulk

Looking for another article with the name Hulk? Check out the Hulk disambiguation page.

Hulk is the brutish green monster that Bruce Banner turns into whenever he gets angry.

Bruce Banner was the worlds leading expert on gamma radiation. With funding and resources provided Stark Enterprises, Banner was able to create a Gamma Reactor for the U.S. military that harnessed gamma rays. While getting ready to test the Gamma Reactor out in the desert a teenager named Rick Jones wandered onto the blast site. At that same time the gamma reactor was sabotaged by a spy named Samuel Sterns. Banner rushed out to Rick and was able to get him the bunker before the gamma reactor exploded. However, Bruce was not so lucky. Bruce was trapped outside and was exposed to massive ammounts of gamma radiation when the gamma reactor exploded. Sometime later Bruce learned that the gamma radiation caused him to turn in to a giant green monster with incredible strength whenever he got angry. This green monster Banner turned into was later dubbed the Hulk.

Samuel Sterns was later part the crew responsible for cleaning up the radioactive waste that was left behind after the gamma reactor exploded. Sterns accidentally fell into the radioactive waste and it increased his intelligence. The waste also caused Sterns' brain to literally grow. Sterns then took the name the Leader and would later become one of Hulk's greatest enemies.

Wanted man & search for a cure

The United States military eventually learned that Bruce Banner was the Hulk and General Thaddeus "Thunderbolt" Ross began to believe that the Hulk was  the number one threat to national security. Ross then began to use all his resources to capture or even kill the Hulk. This put a strain on Ross's relationship with his daughter Betty Ross who was Banner's girlfriend and a fellow scientist who was searching for a cure for Banner. Eventually, S.H.I.E.L.D. joined General Ross's hunt for the Hulk aswell. Each time Bruce Banner attempted to cure himself his his efforts would be thwarted by the military, S.H.I.E.L.D., or one of his enemies (mainly the Leader).

On one occasion while Banner was searching for a cure he met a man named Mitch McCutcheon. When Banner and Mitch were attempting a cure Mitch's supervisor burst in and interrupted the experiment. An accident in the lab occurred and Mitch was turned into a being of living electricity and began to call himself Zzzax. During their final battle Hulk was able to stall Zzzax long enough until he ran out of power and turned back into Mitch.

Eventually Bruce Banner and Tony Stark became very good friends. Banner then traveled to Los Angeles to Stark Enterprises in hopes that Tony Stark would be able to help him find a cure. However, while Tony was attempting to cure Banner, Stark Enterprises was attacked by the military and S.H.I.E.L.D. War Machine attempted to stall the military and S.H.I.E.L.D. However, Hulk woke up during the experiment and failed to cure him. Hulk then fought Iron Man in his Hulk Buster armor. After the battle Hulk managed to get away and Iron Man played dumb when the military asked where Hulk went.

Bruce Banner went to Washington D.C. to visit his cousin Jennifer Walters. The two of them were then attacked by robots sent by Doctor Doom. The robots kidnapped an injured Jennifer Walters and Doom threatened to kill her if the Hulk did not obey him. The Hulk turned back into Banner when Jennifer's condition worsened. Banner gave her a blood transfusion before Doom used technology to transform him back into the Hulk. On Doom's orders, the Hulk went on a rampage against the U.S. military. Meanwhile, Banner's blood turned Jennifer into the She-Hulk. She-Hulk attacked Doom and freed the Hulk before he destroyed the capital. Hulk and She-Hulk then worked together to defeat Doctor Doom.

Eventually Betty Ross and Doc Sampson were able to create a nutrient bath which would be able to separate the Hulk and Bruce Banner into two separate beings. As Doc Sampson fought the Hulk to attempt to capture him the Hulkbusters arrived. However, Sampson and Hulk were able to escape and make it back to their laboratory. Betty was then able to convince Hulk to go into the nutrient bath but the experiment went wrong when Major Glenn Talbot interfered, but Hulk and Banner did manage to get separated. S.H.I.E.L.D. then took the Hulk's unconscious body from General Ross. Doc Sampson attempted to rescue the Hulk but the Hulk broke free and attacked Sampson because he did not have Banner's influence to control him.

A deranged and unrestrained Hulk ravaged through the countryside. Rick Jones tried to connect with him, but the Hulk didn't seem to remember. The Leader sent the Ogress and his Gamma Soldiers to grab the Hulk so that he could drain his power. Hulk managed to fight them off until the Hulkbusters showed up to make it a three way fight. Eventually, the Leader's forces prevailed and they captured the Hulk. With the Gargoyle's help, the Leader placed his mind in the Huk's body. The Leader with his new powers attacked Gamma Base in order to capture Bruce Banner. The Leader lost control of the Hulk's body and the Hulk attacked the Gamma reactor. Betty managed to calm the Leader who fleed back to his base. The Leader returned to his body, but the Hulk awakened and destroyed his lab. The Hulk left for the desert where he was confronted by Bruce Banner wearing a Hulkbuster suit.

As Banner began to fight the Hulk, Banner began to restrain Hulk by using his insights about the creature, but Banner couldn't bring himself to harm Hulk. General Ross and Major Talbot converged on their position. Meanwhile, the Outcast helped an injured Rick Jones. Banner switched strategies with the Hulk intending to drive Hulk more and more angry. The Hulk suffered from sensory overload until Talbot and Ross arrived. Ross tries to kill the Hulk, but Betty managed to stop him. The Hulk made it clear that he remembered Betty and left. Bruce passed out in pain and was taken to the hospital. Betty tried to marry Bruce Banner, but General Ross would not allow it. Bruce fells unconscious and Doc Sampson realized that they had to reunite Banner and the Hulk or else Banner would die. Betty and Gabriel Jones tracked down the Hulk who had been found by the Outcasts. Betty and Sampson rebuilt the nutrient bath. As they attempted to merge Banner and the Hulk, General Ross interfered. Rick tried to stop him but fell into the nutrient bath himself. The experiment failed, Rick Jones became a green Hulk and Banner became a gray Hulk.

Hulk of a different color

The gray Hulk was much smarter than the green Hulk but also more savage then the green Hulk. While the two Hulk's were trapped in Banner's mind they would fight for control of Banner's body and whoever won would transform. She-Hulk even seemed to have disdain for the gray Hulk which she did not have for the green Hulk. During this time General Ross was in a coma and the U.S. military stopped hunting the Hulk and Banner became a free man. Bruce Banner also accepted the fact that he was the Hulk and stopped searching for a cure and began to use the Hulk to help people. Banner still continued to travel the country but was now accompanied by his cousin She-Hulk who would often help him on his adventures. General Ross eventually woke up from his coma and he forgave the Hulk and Banner and the two of them began a fresh start as Ross gave Banner his blessing to marry his daughter, Betty.

Hulk was one of the founding members of the Avengers but he left the team for unknown reasons.

As Bruce Banner gets angry this causes him to transform into a giant green monster. As the Hulk, Banner is super strong and is able to lift several tons. The muscles in his legs also allow him to travel far distances by jumping. The Hulk is so strong that he can slam his hands together to create a sonic blast capable of knocking an opponent off their feet. Also the angrier that the Hulk gets the stronger he becomes.

Hulk from The Incredible Hulk

Grey Hulk from The Incredible Hulk

Hulk from X-Men: The Animated Series 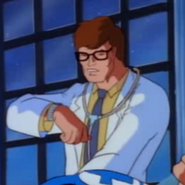