Giselle Loren's credits include an appearance in Happy Feet, a recurring role as Stargirl in Justice League Unlimited and a part as the wife of Curt Connors in Spider-Man: The Animated Series.

Her live-action work has been limited so far. She appeared in the short film The Caretaker and also played the role of a female police officer in Nancy Drew in 2002.

Giselle Loren is a graduate of Duke University and is a licensed attorney. 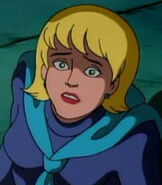