Christopher Jay "Chris" Potter is a Canadian actor, musician, and pitchman. He is primarily known for his roles on soap operas and prime-time television. Potter is known for his roles as Peter Cain on the 1990's crime drama Kung Fu: The Legend Continues, Dr. David Cameron on the first season of Queer as Folk, as the voice of Gambit on X-Men: The Animated Series, and for his recurring role as con-artist Evan Owen on The Young and the Restless. Currently he plays Tim Fleming on the drama Heartland.

Chris Potter was born on August 23, 1960 in Toronto, Ontario, Canada to Ron Potter, an ex-football player and insurance salesman, and Judith Potter, a singer and is the oldest of three children. Potter was raised in London, Ontario, Canada. He had an early interest in sports such as hockey, baseball, and football, as well as in community theater.

Successful in sports throughout his high school years (attended Oakridge Secondary School in London, Ontario), Chris wanted a professional career as an athlete; however, his father would not permit it. He later quit college to start a career as a rock musician. He discovered a love for theater and became a professional stage actor. He also worked on an oil rig in Northern Canada, sold cars, and later became an insurance salesman.

Potter later left the insurance company to start his career on TV, as an actor and a pitchman.

After being a spokesman on many commercials in the 1980's, and his role in Material World, he finally made his mark in TV playing David Carradine's son and crime-fighting partner, Det. Peter Caine on Kung Fu: The Legend Continues, after receiving a contract with Warner Bros. in 1992. He also appeared in Silk Stalkings.

Peter was featured in Rocket's Red Glare (2000). He appeared on the first season as Dr. David Cameron on Queer as Folk opposite Hal Sparks, and he starred in a mini-series A Wrinkle in Time (2003) for ABC. Potter also appeared in Spymate (2006).

The following year, he landed another role opposite Amber Marshall in the CBC Television series Heartland playing the role of Tim Fleming. Also in 2007, Potter joined the cast of The Young and the Restless in a recurring role as Evan Owen, playing opposite Judith Chapman, with whom he had previously appeared on an episode of Silk Stalkings; Potter remained on The Young and the Restless until being written out in early 2008.

Aside from acting, Potter is also a singer and songwriter. He recorded the CD Tourmaline, for which he wrote all the songs. He also plays guitar, drums, and piano.

His wife's name is Karen, and they have four children: Jesse, Quinn, Claire, and Gray. 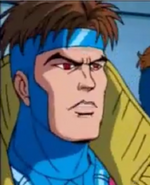