The Chameleon is an international hitman and terrorist that can disguise himself as anybody and copy their voice.

The man that would become Chameleon was born in either the 1930s or early 1940s. As a young child, Chameleon was orphaned and later adopted by the Nazi war criminal, the Red Skull. Chameleon was raised alongside Red Skull's biological son Rheinholt Schmidt.

Red Skull later gave Chameleon a belt that projected a hologram around his body allowing Chameleon to disguise himself as anybody. This device was called an image inducer. Red Skull then taught Chameleon how to use the image inducer.

In the present Chameleon became an international hitman and assassin. He was the best at what he did because of his ability to use his image inducer to take the appearance of others and get close to his targets to eliminate them. Chameleon then became one of S.H.I.E.L.D.'s most wanted criminals and they began to hunt him. However, each time Chameleon was able to use his image inducer to change his appearance and escape S.H.I.E.L.D.

S.H.I.E.L.D. eventually learned that Chameleon was hired by terrorist to sabotage a peace treaty signing between two countries that have been at war for for several years. Nick Fury knew that Chameleon would attempt to assassinate the two world leaders at J. Jonah Jameson's party for the VIPs so he enlisted the help of Jameson and told him to report any suspicious activity to the undercover S.H.I.E.L.D agents. Peter Parker had also been taken by S.H.I.E.L.D. and was secretly listening to their conversation and learned of the Chameleon as well.

Chameleon later snuck into the Daily Bugle in the guise of J. Jonah Jameson and was able to steal the security plans for the VIP party that the two world leaders would be attending. As soon as Jameson realized that Chameleon took the security plans he alerted the undercover S.H.I.E.L.D. agents and Spider-Man went after him as well. However, Chameleon was able to escape by taking the identity of Peter Parker.

That night Chameleon was able to break into the Daily Bugle but is confronted by Spider-Man. However, Chameleon is able to get away from Spider-Man by using one of his disguises. As Chameleon makes his way to the penthouse he takes the identity of Nick Fury and orders Agent X to get the VIPs to the roof so they could get them to safety. As Agent X, J. Jonah Jameson, and the VIPs get to the roof Spider-Man watches them as they are greeted by Nick Fury. However, Spider-Man realizes that Fury's eyepatch is one the wrong eye and tackles him knowing that he is the Chameleon. As the S.H.I.E.L.D. agents held Spider-Man down he yelled at them that Fury's eyepatch is on the wrong eye. Agent X notices this and holds Chameleon at gunpoint. However, Chameleon is able to escape by stealing a plane on the roof. Agent X was able to shoot the plane down but Chameleon was still able to escape.

The next day Peter Parker went to the United Nations to take a picture of the peace treaty signing. However, J. Jonah Jameson was curious at to how he got past security. As Peter aimed his camera at the world leaders Spider-Man arrived and shot his web at the camera which fired a laser blast onto the wall and revealing that he was really the Chameleon. As Spider-Man fought the Chameleon he hit him in the buckle of his image inducer causing it to malfunction and the electricity from the belt caused Chameleon to pass out. The Chameleon was then taken into S.H.I.E.L.D. custody.

When Silvermane and the Crime Cartel thought that Kingpin was losing control of his territory due to the actions of Spider-Man they quickly turned on him. However, Kingpin assured the Cartel that he had a plan to take care of Spider-Man once and for all. At that moment Alistair Smythe sent a tiny robot into Chameleon's prison cell. The tiny robot handed Chameleon a new image inducer and a communicator which allowed Smythe to talk to him. As Chameleon put on his image inducer he took the appearance of the prison warden and tricked a guard into freeing him. Chameleon then used his inducer to take the appearance of the guard and freed Doctor Octopus, Shocker, Mysterio, Rhino, and Scorpion from their cells. As Chameleon and the others made it to the front of the prison they were met by a helicopter that took them to meet the Kingpin. That was when Kingpin asked them to join what he was calling the Insidious Six and that together they would finally kill Spider-Man.

Kingpin later had Herbert Landon infuse Chameleon's body with a techno-organic virus which turned him into a cyborg. Chameleon's new cybernetics allowed him to transform without the use of his image inducer. The techno-organic virus also implanted video cameras in Chameleon's eyes. These cameras allowed Kingpin to see what Chameleon saw. Kingpin then ordered Chameleon to purposely get arrested so that he would be imprisoned on the S.H.I.E.L.D. helicarrier with John Hardesky. Chameleon's cybernetics also transmitted a powerful homing signal so Kingpin could find where the S.H.I.E.L.D. helicarrier was located.

After his trial Peter was kidnapped by Chameleon who was disguised as Spider-Man. Chameleon took Peter to an abandoned warehouse where Peter learned that Richard Fisk was the one that framed him. Fisk and Chameleon then left the warehouse. Peter was left to die but he was saved by Daredevil.

Peter's Aunt May later became ill and was taken to the hospital. Kingpin realized that Peter would find a way to see his aunt and decided to set a trap for him. After Peter was done visiting May in the hospital Anna Watson walked in and offered to help Peter get out of the hospital without being seen. Anna helped Peter and Mary Jane get out of the hospital. However, Anna Watson was actually Chameleon in disguise. As they got outside Chameleon pushed Peter and Mary Jane into the back of a van and knocked them out with gas.

Chameleon then took Peter and Mary Jane to Kingpin's mansion and placed them in an decompression chamber and began to suck the oxygen out of the chamber. However, Terri Lee and the police arrived and began a firefight with Richard, Chameleon, and Susan Choi. Daredevil then arrived and fought Chameleon. However, Daredevil was able to tie up Chameleon with the rope in his billy club. However, Chameleon was able to break free and escape.

Daredevil and Spider-Man tracked Chameleon to Crime Central. Daredevil fought Kingpin. However, Kingpin was able to escape on a helicopter. Spider-Man shot a web line at the helicopter and grabbed hold of Daredevil. Spider-Man was able to force the helicopter down and capture Kingpin. However, it turned out to be Chameleon disguised as Kingpin. Chameleon was then put on trial along with Richard Fisk and Susan Choi. All three of them were found guilty and sent to prison. Just as Kingpin had anticipated Chameleon had been imprisoned on the S.H.I.E.L.D helicarrier because the U.S. government had considered him too great a threat to man kind to be placed in a regular prison.

Chameleon's main piece of equipment was his image inducing belt. With the image inducer Chameleon could store images of people in the memory of the belt buckle and from the images could create holographic images of those people that would form around his body. Aside from using the image inducer to disguise himself as other people it also allowed him to change his voice to match the people he was impersonating.

Chemeleon was later infused with a techno-organic virus. This virus turned part of Chameleon's body into a machine making him a cyborg. Chameleon's cybernetics allows him to transform without the use of the image inducer.

Chameleon would also use smoke grenades to blind his opponents. 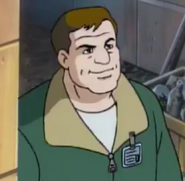 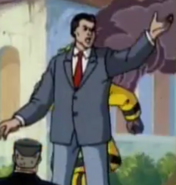 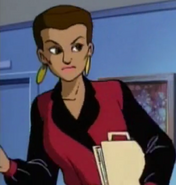 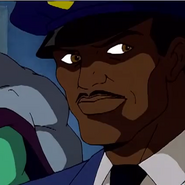 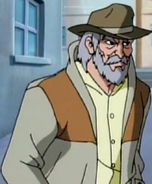 May Parker
as a witch 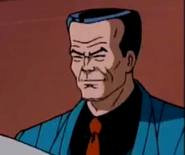 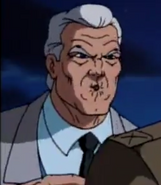 The son of an exiled Russian aristocrat and a young servant girl, Dmitri Smerdyakov was never loved as a child. His father hated the sight of him, and his mother considered him an embarrassment. Only Sergei Kravinoff, his older half-brother (and future Spider-Man enemy, Kraven the Hunter), deigned grudgingly to acknowledge him. Obsessed with pleasing Sergei, Dmitri often put on little shows for him, acting out the various parts. Dmitri also began impersonating his classmates and neighbors, copying their physical idiosyncrasies with uncanny skill. He learned how to use makeup to modify his appearance and eventually began to create realistic facial masks and disguises.

Spider-Man first encountered Chameleon after Chameleon disguised himself as Spidey and stole missile plans from a military base. However, Spider-Man was able to clear his name after capturing the Chameleon.

In the series, Chameleon had no relation to Kraven the Hunter. Instead, Chameleon was the adopted son of the Red Skull and Electro's brother.