Brian Keith (November 14, 1921 - June 24, 1997) was an American film, television, and stage actor who in his six-decade-long career gained recognition for his work in movies such as the 1961 Disney movie The Parent Trap, the 1966 comedy The Russians Are Coming, and the 1975 adventure saga The Wind and the Lion. On television he is known for his roles in Family Affair, Hardcastle and McCormick, The Brian Keith Show and Heartland.

Brian Keith was born Robert Alba Keith in Brooklyn, New Jersey, on November 14, 1921, to actor Robert Keith and stage actress Helena Shipman, a native of Aberdeen, Washington. Some sources also list his full name as Brian Robert Keith. He was raised Roman Catholic. His parents divorced, and he moved to Hollywood and started his acting career at the age of two. He made his acting debut in the silent film Pied Piper Malone (1924) at the age of three. His mother continued to perform on stage and radio, while Robert's grandmother Apker helped to raise him on Long Island, New York, just 37 miles east of where he was born. She taught young Brian to read books over his age level. Prior to learning to read, he spent a lot of time backstage while his parents performed, being quiet for hours. Helena fondly recalled keeping little Brian in the dressing room in one of her dressing room drawers. He remained calm and was quiet and would sleep through the entire show. From 1927 through 1929, Keith's stepmother was Peg Entwistle, a well-known Broadway actress who committed suicide by jumping from the "H" of the famous Hollywood Sign in 1932.

After graduating from East Rockaway High School in 1939, in East Rockway, New York, he joined the United States Marine Corps (1942 - 1945). He served during World War II as an air gunner (he was a radio-gunner in the rear cockpit of a two-man Douglas SBD Dauntless dive bomber in a U.S. Marine squadron), and recieved an Air Medal.

After the war, Keith became a stage actor, branching out into films and then television. In 1952, he made his debut on three episodes of Tales of Tomorrow, which led him to other roles in shows such as Police Story, a 1950's anthology show, Eye Witness, The United States Steel Hour, Robert Montgomery Presents, The Motorola Television Hour, Campbell Playhouse, The Pepsi-Cola Playhouse, The Elgin Hour, The Adventures of Ellery Queen, and Jane Wyman Presents: The Fireside Theatre. In 1955, Keith starred in his own series, Crusader, as the fictional journalist Matt Anders, who tries to free captive peoples from communist countries.

During the 1950's and 1960's, Keith also had guest roles on The Ford Television Theatre, Wire Service, Alfred Hitchcock Presents, Climax!, Zane Grey, Theater, Rawhide, Laramie, The Untouchables, The Americans, Outlaws, The Virginian, The Fugitive, two episodes of Wagon Train, and five episodes of 77 Sunset Strip (which stars Efrem Zimbalist Jr.), among many others.

In 1960, he won acclaim for his starring role in Sam Peckinpah's extremely hard-bitten, adult, and short-lived series The Western (1960). The following year, Keith appeared as the father of twins in the 1961 film The Parent Trap, costarring Haley Mills and Maureen O'Hara. In 1966, Keith costarred with Steve McQueen as traveling gunsmith Jonas Cord in the western Nevada Smith. In 1968, as widower Jake Iverson, he costarred with Doris Day in the comedy, With Six You Get Eggroll.

In 1966, Keith landed the role of Uncle Bill Davis on CBS's popular television sitcom Family Affair. This role earned him three Emmy Award nominations for Best Actor in a Comedy Series. The show made him a household name. It was in the vein of such successful 1960's and 1970's sitcoms that delt with widdowhood and/or many single-parent issues as: The andy Griffith Show, My Three Sons, The Beverly Hillbillies, Petticoat Junction, Here's Lucy, Julia, The Courtship of Eddie's Father, The Brady Bunch, The Partridge Family, and Sanford And Son. During it's first season in 1966, the show was an immediate hit, ranking #15 in the Nielsen ratings. By the end of the fifth season in 1971, Family Affair still had high ratings, but was canceled after 138 episodes.

Kathy Garver said about her on and off-screen relationship with Brian Keith "I'm a cultural Irishman, don't you know, I'm a cultural Irishman, 'but he went through many manifestations and changes of career, during the five years that we shot. At first, he was up and then hi second year, he was going through a divorce and then, the third year, he met somebody else; and he became more anecdotal and told stories that he loved kids, and he was very outspoken about those that he did not like. So, he was very interesting character and it was Brian and Sebastian Cabot (who played Mr. French) had such a different style of acting and that's another reason I think that Family Affair was so popular and stayed as it did. Both excellent actors, both coming from very different methods and styles of acting with Sebastian was more from the classical style and he would take home his script and he would dutifully look at every single word and have it to perfection, and then Brian would come in and say, "Oh what do we have today? Let me see the scene, uh-huh, uh-huh, let's go!" So he was very improvisational, motion of the moment. And those two different styles really worked out each other, very well."

Keith went to star as the pediatrician Dr. Sean Jamison in the NBC sitcom The Brian Keith Show, filmed in Hawaii on an estate at the foot of Diamond Head and also known as The Little People. The series was canceled after two seasons in 1974. In the 1975 film The Wind and the Lion, he played President Theodore Roosevelt. Keith once again returned to series television in 1983 with Hardcastle and McCormick, in the role of a cranky retired judge named Milton C. Hardcastle. Daniel Hugh Kelly costarred as ex-con Mark McCormick in the ABC crime drama with elements of comedy. The chemistry of Keith and Kelly was a hit, and the series lasted three years until it's cancellation in 1986.

Keith also starred in the role of Steven "The Fox" Halliday in the six-part television mini-series, The Zoo Gang, about a group of former underground freedom fighters from World War II. The show also starred Sir John Mills, Lilli Palmer, and Barry Morse.

He made a guest appearance in the first season of the show Evening Shade in the spisode "Chip Off The Old Brick", as the loud-mouthed father of Herman Stiles (played by actor Michael Jeter).

Keith spoke fluent Russian, which led to his casting as a Russian in two roles: the Soviet Premier in World War II with Rock Hudson, and as a Soviet scientist in Meteor with Natalie Wood. In The Russians Are Coming, the Russians Are Coming, where he played the unexcitable police cheif of an island where a Soviet submarine runs aground, however, his character had to have Russian translated to him by Alan Arkin's character.

Keith married three times, first to Frances Helm; then, in 1954, to actress Judy Landon (who made a guest appearance on Family Affair); and finally, in 1970, to Hawaiian actress Victoria Young (nee Leialoha), who later appeared on The Brian Keith Show as Nurse Puni.

Keith fathered two children with Judy Landon (Michael and Mimi) and together they adopted three others (Barbra, Betty, and Rory). He had two children with Victoria Young (David and Daisy). Daisy became an actress and appeared with her father in the short-lived series Heartland in 1989.

During the later part of his life, Keith suffered from emphysema and lung cancer despite having quit smoking 10 years earlier (he appeared in an endorsement campaign for Camel cigarettes in 1955.) On June 24, 1997, he was found dead of a self-inflicted gunshot wound in his home at 23449 Malibu colony Road in Malibu, California, two months after his daughter committed suicide. It was also reported that he had financial problems and suffered from depression throughout his final days. Maureen O'Hara stated in an interview not long after Keith died, that she emphatically believed he did not commit suicide. She stated that he had a large gun collection and enjoyed cleaning them and showing them to people. She believes he might have been cleaning the gun or looking at it when it went off and was an accident and definitely not a suicide. She had just visited with him and said he was fine and in good spirits. Also, she stated he would not have committed suicide due to his Catholic beliefs. Keith's family was joined by many mourners at a private funeral, including Family Affair costars Johnny Whitaker and Kathy Garver, and Hardcastle and McCormick costar Daniel Hugh Kelly.

He was interred next to his daughter Daisy at Westwood Village Memorial Park Cemetery in Los Angeles, California. 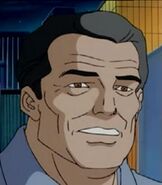 Retrieved from "https://spiderman-animated.fandom.com/wiki/Brian_Keith?oldid=55078"
Community content is available under CC-BY-SA unless otherwise noted.