Alison Sealy-Smith is a Barbadian actress. She is known for her role as Storm in X-Men: The Animated Series and for her roles in the movies Dark Water, You Kill Me, and Take the Lead.

Alison Sealy-Smith was born in 1959 on the island of Barbadian. Smith was also raised on Barbadian.

Sealy-Smith attended Mount Allison University in New Brunswick, Canada, where she studied psychology on a scholarship.

Smith is the founding director of Obsidian Theatre, a company that specializes in Black Canadian drama. Sealy-Smith was awarded a Dora Mavor Moore Award for her 1997 star turn in Djanet Sears' Harlem Duet. Her film and television credits have included the series Street Legal, This is Wonderland and The Line, and a recurring role in Kevin Hill. She also had a small role in the 1998 Disney Channel Original Movie, My Date with the President's Daughter.

Sealy-Smith also provided voices in various cartoons such as Storm on the 1990's X-Men: The Animated Series and Scarlet on the cartoon Delilah and Julius. She also played Sergeant Rose in the film Confessions of a Teenage Drama Queen opposite Lindsay Lohan. She has also appeared in many Hollywood films, including Honey opposite Jessica Alba, Dark Water with Jennifer Connelly and Talk to Me with Don Cheadle. As of the mid-2000's, she has a recurring role as Ms. Mann in the children's series Naturally, Sadie. In 2009, she performed as Nurse Lydia in the HBO Canada series Bloodletting & Miraculous Cures.

Alison Sealy-Smith has a daughter named Makyla Smith who is also an actress. 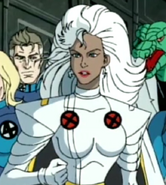 Storm
Add a photo to this gallery

Retrieved from "https://spiderman-animated.fandom.com/wiki/Alison_Sealy-Smith?oldid=41311"
Community content is available under CC-BY-SA unless otherwise noted.